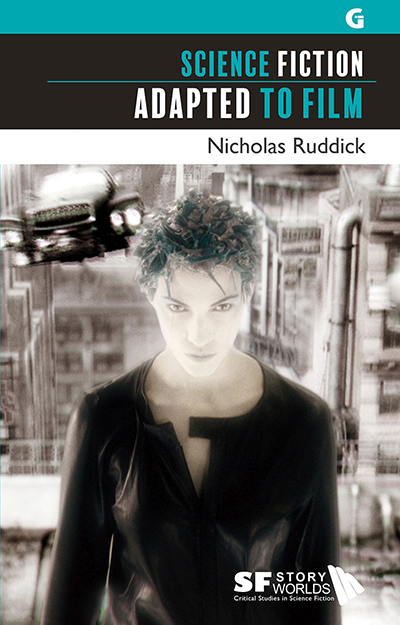 The focus of this study is the adaptation of sf literature to film. Its chief purpose is to explore how sf novels, novellas, and short stories worth reading have inspired films worth watching. The book concludes with a checklist of significant films adapted from sf works, and a list of primary and secondary texts that have been cited in the study.

Encyclopedic and eminently readable, Ruddick's study of the complex relationship between literature and cinema in science fiction will interest scholar and fan alike. Through individual case studies, the volume considers the remediations and translations that occur when the novel is fed into the projector (or DVD player) and sees what the camera does to Verne, Wells, Asimov, Bradbury, Clarke, Ballard, Dick, Crichton, Atwood, and many other major sf authors. The reader will see films such as 2001, Planet of the Apes, War of the Worlds, Blade Runner, and the hundreds of versions of Frankenstein through new eyes and with a deeper appreciation. —-Kevin J. Wetmore, Jr., Professor and Chair, Theatre Arts Program, Loyola Marymount University

I admire Nicholas Ruddick's lucidity – not only his superbly readable style, but also the clarity of his perceptions. His coinage 'remediation' is intriguing and useful. --Christopher Priest

This is a very thoughtful and informative study which manages to avoid all the clichés about accuracy of adoption. It should become essential reading for anyone interested in the intersections between SF and film. --David Seed

Like the Roman god Mercury, Nick Ruddick moves fleet-footed across a vast terrain demarcated on one hand by science-fiction prose and on the other by science-fiction cinema. Equally at home with the abominable and the above-average, he chases at the speed of thought after that elusive artistic grail: a successful film adaptation. The result is a book that will enlighten the scholar and entertain the fan, of which science fiction – and Ruddick – has many. Peter Swirski, bestselling author of From Literature to Biterature: Lem, Turing, Darwin

Nicholas Ruddick has given us a subtle exploration of the relationship between the words and images we use to try to capture the ineffable. And in doing so he has provided a unique glimpse of the deep structure of the science fiction imagination. Authoritative, accessible, essential. --Stephen Baxter

Part I: ‘Shouting through Thick Felt in a Thunderstorm’: SF Writers on Film, SF Filmmakers on Literature

Checklist of Significant SF Film Adaptations and their Sources