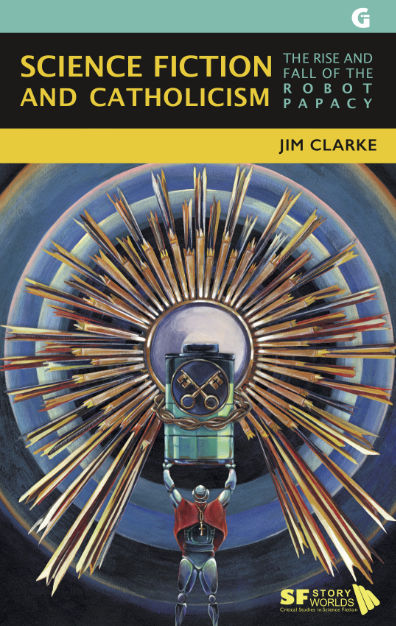 Science Fiction and Catholicism: The Rise and Fall of the Robot Papacy

Aliens? Absolutely. Robots? Of course. But why are there so many priests in space?

For over a century, Science Fiction has had an obsession with Roman Catholicism. The religion is both SF’s dark twin and its dirty secret.

In this first ever study of the relationship between Catholicism and SF, Jim Clarke explores the genre’s co-dependence and antagonism with the largest sect of Christianity. Tracking its origins all the way back to the pamphlet wars of the Enlightenment and SF’s Gothic origins, Clarke unveils a story of robot Popes, Jesuit missions to the stars, first contact between aliens and the Inquisition, and rewritings of the Reformation.

Featuring close readings of over fifty SF texts, Clarke examines how the genre’s greatest invention might just be the imaginary Catholicism it repeatedly and obsessively depicts, a faux Catholicism at odds with the religion’s own intriguing interest in both science and the possibility of alien life.

Science Fiction and Catholicism is excellent: an original, ambitious and thought-provoking book about Catholicism as the ‘counter-narrative’ of SF as such, the ways Anglophone SF has represented, misrepresented and in the process been radically informed by Catholicism. --Adam Roberts

Both an argument with those who define SF against religious unreason and a reformulation of what SF is, Jim Clarke’s Science Fiction and Catholicism presents a sustained critical analysis that made me think again about everything from the relationship between H. G. Wells and James Joyce to the functioning and purpose of the sub-genre of alternate history. This is an important and overdue intervention in SF studies. --Nick Hubble, Brunel University London

Introduction
The Contested Territories of Science Fiction and Catholicism

Chapter 2: The Rise and Fall of the Robot Papacy
Catholicism and Machine Intelligence